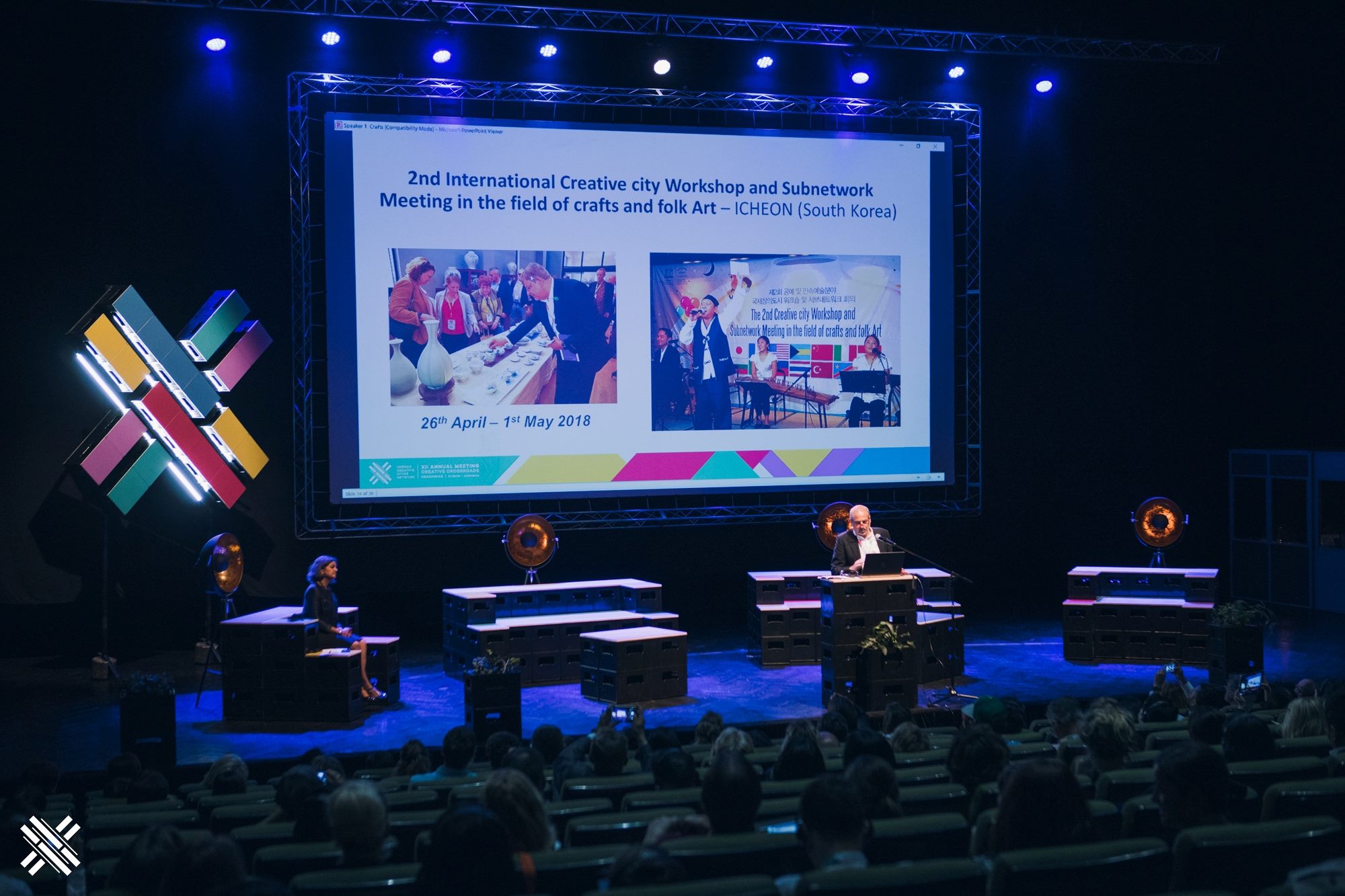 Fabriano coordinated its last Craft and Folk Arts Sub-group (CFA) sessions as cluster coordinator during the Krakow-Katowice Annual Meeting, one 4 hour meeting and two 2-3 hour meeting of the sub-group while in Krakow, on June 11, 12 and 13, 2018.

The initial four hour meeting on June 11, 2018, served primarily as an opportunity for newly designated cities to the CFA to meeting other members of the sub-group, introduce themselves to the sub-group, and for the cities present to provide updates on the creative work being done in their respective cities.

Existing cities in the CFA additional presented their current initiatives in support of their status as creative cities and as members of the UCCN toward the 2030 Sustainability Goals and the New Urban Agenda.

In particular, the Meeting strongly endorsed the San Cristobal Declaration, calling for a new format of events based on contamination between different creative clusters, and the Days of Bread project, launched by the Cities of Gastronomy to promote research and consciousness on the value of bread and its homologues in material culture and cultural heritage.

Finally, the agenda for the meeting of the sub-group the next day was also noted.

The three hour meeting of the CFA on June 12, 2018, continued the introduction of new members of the CFA and their programs, as well as again hearing from the existing cities with their current programs and projects. All were encouraged to share their projects and programs with the Secretariat to the extent feasible. There was brief discussion of certain challenges to accomplishing this given the nature of legal releases that are required up front.

The primary business of the second CFA meeting was the consideration of the Draft Conclusions of the XII Annual Meeting of the UNESCO Creative Cities Network: CFA unanimously agreed to provisions identified by Section Numbers 1, 2, 3, 4, 6, 7, 8, 9, 12 and 13.

Section 11 was acceptable except for the stated dates of June 5 to 10, 2019, which conflict with Eid Al Fitr, the end of Ramadan, and thus the CFA sub group requested to the Secretariat the selection of a new date.

Section 10, which asked for the Secretariat to explore mandatory contributions, wasn’t approved by the CFA sub group, due to both the complexities of obtaining approvals that might require action in certain cities at a national level and the practicalities of ensuring funding in times when budgets in a city might be too tight: the CFA  sub group reaffirmed its full support of voluntary contributions in the amount recommended by the Secretariat previously and repeated calls to the membership to make their voluntary contributions on an annual basis. Section 5, dealing with the selection of SG members was deferred to the June 13, 2018 meeting.

CFA members unanimously decided to give to the city of Icheon the task of coordinating the Network for the next two years, with the city of Paducah as vice-coordinator.

The meeting on June 13, 2018, presented opportunities for the CFA to further discuss the CFA’s internal communications efforts and platforms and creation of platforms to further the creative and sustainable economies of the members. Additionally, several members provided updates on projects undertaken in their cities that contribute to their participation as creative cities.

The next item of business to come before the meeting was the selection of the city to host the next annual meeting of the CFA. Kanazawa stated its desire to host this meeting and made a brief presentation to the members.  Other interested cities were asked to identify themselves, but none did, and Kanazawa was unanimously selected as the next host city of the sub-group annual meeting. The date of that meeting has yet to be determined.

During the Sub Group presentation in the plenary meeting held in Katowice, Fabriano’s Focal Point Vittorio Salmoni described the accomplishments and initiatives promoted by the CFA sub-cluster in the last two years.

The 2016-2017 period has been crucial to the activities of the CFA Sub Group, which has grown from 12 to 37 cities thanks to the last round of accessions: the Sub Group now involves cities from the smallest up to mega-cities such as Cairo, located on all continents.

CFA cities also stressed their contribution to the Agenda 2030 Goals, endorsed by UNESCO, underlining their relevance to their joint actions and projects.

The CFA members organized their activities on the following areas:

In the spirit of the UNESCO Creative Cities Network, Cities of Crafts and Folk Art have strenghtened their connections and interactions, promoting infra- and inter-cluster connections, through contamination between different arts and creative practices.

Among the events and projects, Sub-network meetings of Paducah and Icheon; the Days of Bread project involving the Cities of the CFA and of Gastronomy; the “Poetic Encounters” project involving Fabriano, Mannheim, Tel Aviv and the Cities of Literature; the San Cristobal’s declaration, born from the “Sabores Y Saberes” event, which aims to establish an event format aimed at inter-cluster collaboration and creative contamination;

Also, many Creative Cities are working on joint web platforms of promotion for craft products, integranting e-commerce and marketing functions.

Cities of the CFA worked on a joint Cluster project, aimed at showing and promoting the peculiarities and strong points of each city, presented to delegates of the Crafts and Folk Art Creative Cities at the 2017 Annual Meeting.

The connection between arts, crafts and creativity has been promoted by Cluster members through various experiences of artists-in-residence program, promotion of international cultural events, and meetings between master artisans and artists, such as Hangzhou's Fusion and Korean-Chinese exhibitions, and Paducah's residencies.

Cluster cities have also engaged in research programs, promoting a greater understanding of the open issues in the fields of sustainability, resilience, culture, creativity and innovation in traditional crafts, such as Hangzhou, Chiang Mai and Icheon's ceramics training initiatives and Fabriano's digitazion and entrepreneurship initiatives, as well as the RINASCO project, aimed at supporting post-earthquake recovery in Central Italy through strategies of social innovation and digital transformation.

Challenges and opportunities for the CFA network

1- Promoting more intra-cluster dialogue and cooperation, through joint actions and events and the establishing of permanent communication and project-management platforms;

3- Researching the impacts of cultural and creative policies and investments, promoting a deeper understanding of the nexus between creativity and social and economic cohesion and growth;

4- Promoting a new understanding of resilience, concerning both communities and crafts and skills;